Four years ago our Berlinograd author Dasha Suomi landed in Tegel with a backpack and a suitcase, where she fitted the first twenty years of her life. A lot of bizarre, funny and bitter stories shook up. Apartment search, dating, palette of the immigrant communities and notes on the sides of the Neukölln bars will emerge here. Fasten your seat belts, here she comes.

Finding an apartment in Berlin has now become a more challenging task than ever before. I have got a feeling that people who are hunting for a flat and those wishing to rent out their flats exist in two parallel Berlins. And, frankly speaking, I’ve lived in one too.

When I just moved to Berlin, the flat search was not as intense as it is now, however, the situation was already coming to a head. My first room was in a plattenbau near Alexanderplatz. When I arrived at the Weltuhr to meet with my future flatmate, I realized that I had no idea what he looked like. My friend asked some guy for a lighter, got what he wanted and in ten seconds the guy turned back to us asking if I was actually the one who he had spoken with a couple of weeks ago. He nodded and I wound up in my first Berlin home. What really surprised me after my previous dorm experience was that flatmates appeared to share certain foods like bread and milk, but it did not always work out fairly.

“When my grandmother visited me two weeks later, she found an empty carton of milk in the fridge, nodded disappointedly and told me “I have seen an attempt to build communism already and it didn’t end up well’.”

The last days of August were knocking on the door when I was cycling through Berlin like I was about to win the Tour De France in the hopes of finding something. The competition is high and it is not enough to just be ‘a nice guy’, you also have to have a bunch of documents which prove that you have at least a four-digit sum in your bank account and your previous landlords describe you as quiet as a cat step and as reliable as a Swiss watch. To rent an apartment you need a bank account. To get a bank account you need a letter of registration, but to obtain this one, you need to have an apartment. A bureaucratic hellish circle is in its place.

“My grandmother felt a bit offended when I suggested that she stay at home while I wander through random parts of the city, so I took her with me, merrily wasting my and other people’s time.”

Walking every day from door to door, you get the feeling you’re not only homeless but also kind of unemployed too, despite me having an internship coming up. It remained an open question what my potential flatmates were doing at home in the weekday afternoon.

I saw a typical Neukolln apartment with snow-white walls and two bulldogs as flatmates. I felt like I was back in Moscow when I visited a huge room in Stalin empire style on Karl-Marx-Allee and got to know a musician and neurotic man who didn’t make eye contact even once during the whole time I was with him.

“Spoke to a guy who offered me not only a tiny room near Prinzenstrasse but also co-living with Berghain-like flatmates, non-stop parties and regular Couchsurfing visits. I don’t have anything against the latter, but I had to admit to him that I would work full-time and then the flow of disappointment filled the room.”

A great apartment with a view on Treptower Park and decorated with photo wallpaper depicting pines was introduced to me by some North American, who was smiling, I believe, the entirety of the time I spent in the flat. ‘I will get in touch with my friend, who is in Malaysia at the moment, and of course I will call you back’. Guess what? I didn’t get the pines.

Once, I entered a huge duplex flat where the conversation with future flatmates felt more like a job interview led by unemployed people rather than a conversation about the apartment. I was bombarded with questions beginning with my education and finishing with a rigorous examination of Spotify preferences. I thought that I should probably print a witty and short biography and hand it in before entering any flat viewing.

As they admitted half an hour later, they all might gradually move out from this apartment and the flatmate search is an ordinary process. I saw the room – wide, big, the window located precisely in front of brandmauer. It was decorated with a childish painting of a rainbow, sun and a couple of depressive clouds. And a rabbit. “We will get in touch with you!’ I heard as I was running down the stairs. ‘No need to strain’ I thought and looked at my calendar. There were ten days left before I would have to move into the office of the company, that I hadn’t even properly started to work at. Every day, my flatmate was politely asking me if I had found anything yet.

“I remembered a line “The enlightenment in the moment of despair” and one evening it really did beam on our kitchen.”

A girl invited me to see the flat in Neukolln and I immediately took off there, thinking I wouldn’t  mind how it looked, I would take it anyway. There was a ginger wall, a triple-bed, a huge balcony and another room painted fuchsia. We had a small-talk, laughed, agreed to meet up in a week to sign papers and I left, elated.

In one year and a half I finally found a place, which now I call ‘home’. I have got holes in the wall, one of them is gently framed in an artsy way, a box on the ceiling which can be lifted with a rope, originally was intended for potatoes, and a huge, meter-high duplex bed, where I could potentially hide all my secret lovers. You will find one too.

In the new Berlinograd column “Berlin Biased“ Dasha Suomi will write about her experiences as a Russian expat living in Berlin. Follow Dasha’s Russian Telegram channel if you want to read more of her stories.

The first article of “Berlin Biased.” was brought to you by www.nestpick.com. Nestpick is the biggest platform to search for mid-to-long term rentals. A platform Dasha wished she’d known four years ago. It would have saved her lots of troubles with the famous German bureaucracy. 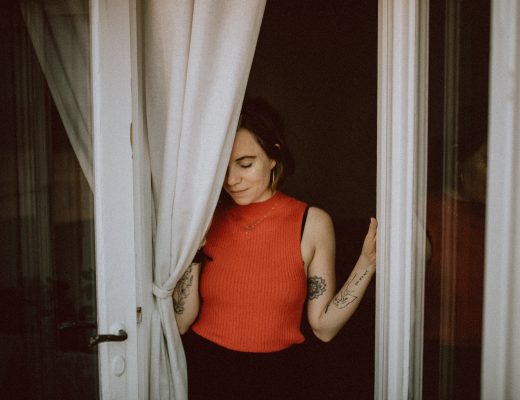 Berlin Biased: An Anthropological Exploration of a Russian Immigrant’s Apartment