Berlin Biased: An Anthropological Exploration of a Russian Immigrant’s Apartment

An anthropological exploration of a Russian immigrant’s apartment

For those, who might have forgotten who is writing here – I’m Dasha and I have been living (surviving) in Berlin for the last four years. Kind of trying to pull the curtain of the so-called immigrant life of a media proletarian, sharing funny and sentimental stories.

One of my good friends, a former Berliner, now a Muscovite and a teacher in a secondary school, suddenly informed me that he and his pupils are coming to Berlin. I got kind of sad, presuming that meant no wild times for us. However, he had something better to offer.

‘I am coming with the kids for a week, but it’s not just a trip, it’s an anthropological expedition and we really want to see the daily life of a Russian immigrant in Berlin. Do you think we could visit your apartment too?’

I scanned my kitchen, drowned in what I call ‘creative mess’ and my grandmother ‘housewife’s shame’ and sighed, trying to imagine what these teens might have said when entering my ‘bude’.

My grandmother: Mmmah, a nice hole in the kitchen wall, what is that?
Me: To be honest, my dear, I don’t have a clue. Even though, it is in a painting frame, the purpose of it still remains unknown to me. As I have spent a lot of time with Berlin artists, I see how it could be a piece of modern art. Abstract.

Here you have a box, hanging from the ceiling, this probably has a purpose too, right
The ex-tenant nailed a hook and created an elaborate construction for potatoes and onions. When my mom saw it for the first time, she wondered whether I was going to breed doves at home – that didn’t even sound offensive but rather quite reasonable.

Your bathroom seem to be pretty narrow. Looks like it’s less than a meter in width. Really
Well, life in cranky Soviet buildings can prepare you for adaption to any kind of innovation ideas of Altbau architects. I call it a feature, not a bug.

Do you ever-ever water your flowers?
When I just moved into this place, I felt a little bit lonely without formal talks with my flatmates about how my day was , even though we both knew, we probably don’t care. The plants don’t ask but I gave them names. So, we enjoy the silence.

Opening Pandora’s box (my fridge), the young anthropologists could see some artefacts like an orange jam jar which has taken up residence there more than two years ago, a countless amount of antidepressants, which are available in any supermarket – milchschnitte, few alcohol-free beers and an emergency bottle of booze, a cooling eye-mask with an fried-egg print, and a couple of pesto jars bought on sale.

I try to avoid cooking by any means, just not to sadden my and other people’s taste receptors. Self-irony is the new black and I am totally fine with it. Although my grandmother taught me how to make perfect meatballs, and it’s probably the only one magic trick I am capable of. At the point, I would have to move in with someone, I would use the same life hack till I reach the bottom of my bank account.

If you are not capable or in the mood for cooking, but you really need to impress someone, just order a plain take-away from somewhere nearby, put it in a nice plate, and if any doubts are raised about you cooking it , just deny everything and fill the glasses up.

How come the ceiling is so high?
Frankly speaking, for anyone who grew up in a classic plattenbau building in Russia, the height of the altbau apartments looks tremendous. The average height, I believe, is about 3,5 meters and for those who were not morally prepared to freeze in the forest, like some Russian fairy tales suggest, Russians smuggle an immense amount of wool socks and ponchos. Unlike in Russia, where heating works like you are sitting next to a fireplace, in Germany they advertise the practice of sleeping in warm temperatures as unhealthy. Why would I generally rent an apartment, if October’s Berlin wind feels like a summer breeze in comparison to my bedroom?

Guess that’s why the term of ‘winter boyfriend’ is such a trend these days – you save on central heating and share one Netflix account. Netflix and don’t chill yourself to death, mate.

I probably should also admit that 80 percent of the furniture I have at home didn’t belong to me in the first place. My bed was built out of three wooden doors, and has plenty of space inside so I could continue perpetuating capitalism with useless things I would never wear and hide my ex-lovers. The rest of the 80 percent was either found on the street or picked up from my friends – this cycle will continue once I, like they, choose minimalism I found on the street or picked them up from my friends and probably would continue this exchange once I choose minimalism.

Among other questions to be expected might be: how come I have so many Russian books (between a warm coat or books, don’t choose books, poetry won’t help you embrace yourself while facing a pierce winter wind), why do I have five toothbrushes when my apartment is designed for just one person, also dozens of postcards, maps and collection of u-bahn tickets. Do I get pissed or nostalgic when I hear Slavic brothers-neighbours listening and singing with Russian chanson — read prison hits and pop tunes from the nineties — and how do I feel after finding a homeless dudes snoring on the full sound volume in the entrance hall? Well, if you postpone your visits to Russia, Russia will catch up with you anywhere, except for my favourite ‘borodinsky bread’, but no doubts, the young anthropologists will forget to bring too.

**Photo by Kinga Cichewicz on Unsplash 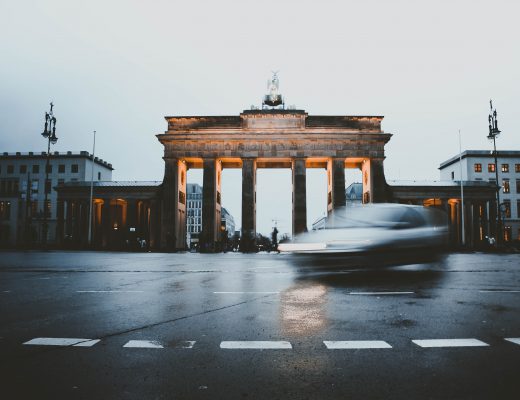