A born Leningrader, Vladislav Overchuk grew up in the typical outskirts of Saint-Petersburg, which he defines as ‘a pretty asocial neighbourhood’. Easily got accepted to the Saint-Petersburg State University for German studies and on the third year ventured to Bremen for an exchange year. A thought to come back to Germany  sparked, when he began his Masters in Interpretation and Translation and got terribly disappointed. “I dropped out from the course, combined jobs of an interpreter at G20 summit with a seller in a souvenir shop and played a little bit of music. Meantime, he also applied to HU University for Slavic studies and I got an  admission letter, I packed my stuff and left Petersburg with neither regrets or doubts.”

The first-side job he found in Berlin was also tied music. “My really good friends helped me to find an apartment and then told me they were about to open a bar in the same building and asked for some extra hands. I was there in the very beginning – firstly, helped to communicate with the bar chef and Russian hand workers and after the opening, ended up as a barkeeper, booker and sound engineer. In some time, I was poached to work on a film production which shook the whole Russian-speaking Berlin at that time, got disappointed and happily returned. Now Vlad is wrapping up his thesis on Kandinsky and from November sets off on a job search in the Berlin music industry.

The band, Vlad founded in Berlin has been called ‘Halbzeug’, but lost the prefix and now remain just ‘zeug’. The style of ‘zeug’ Vlad describes as post-rock or even drone (a sort of music which emphasizes sustained, circular, repeated sounds in the low tune) a lighter grade of metal music, but still pretty heavy and loud. “I wanted to call the band ‘Halbzeug’ [eng:semi-finished item] because it wasn’t a full band, just two of us, me and Udo. At some point, an old friend of Udo, Henning joined us on a few rehearsals and gradually merged into the band and from a half-thing we evolved into a fully-fledged band.”

“We just play just because it is important for us to play”. ‘zeug’ had a tour to the East and gave it a try in front of Polish and Ukrainian listeners. The Ukrainian tour felt much more successful because there ‘zeug’ performed together with a band ’H. Sorror’, playing the similar style, maybe a little jazzier. Vlad defines the Ukrainian audience as young, smart people, who would fancy a joint and get acquainted with some experimental and unusual sounds. When Vlad brought them to Berlin and the bands recurred their success of the Ukrainian tour, it became clear that their audience is quite alike. “Young people, who are tired of predictable rock-music. They are bored to listen to it, we are bored to play it. Here we go”.

“Petersburgers are grumpier and heavier than anyone else. I might also relate to that, but I feel like I have an engine, which drives me to do things and kicks others to do something as well. A few years ago, when my Saint-Petersburg band and other musicians supposed to have a concert and the latter did not show up, because they simply forgot about it, I realized that I am done with that”.

Vlad plans to bring two bands – HEIM from Nürnberg and Ploho from Novosibirsk. In the past, he showed the Berlin audience a Russian band ‘Shortparis’, which recently performed at Fusion Festival, with the assistance of Natasha Padabed.

“Bringing a band from abroad requires a lot of office work, for example collecting all necessary materials from the band’s agent as photos, critics, raider and drowning music halls with letters. This might be especially tough when a booker is not a big player on the market, but I have got my tricks. When I brought Shortparis [trending Russian band], it was a real success as a large score of people came to the concert. Plenty of Russian and Ukrainian bands have written me, asking if I could put them a gig in Berlin in two months in advance and they don’t understand that it’s an extremely narrow timeframe for the Berlin market. Despite the fact that bands with Russian-speaking background might have backers here, I don’t really see the point to target only their Russian fellows. The key is to plan and organize everything in advance and the ideal timeframe would be at least half a year. Despite a large number of tourists flooding Berlin, summer is a kind of a ‘dead season’, as bands perform  at the countless festivals in Germany and nearby countries.”

Russian people are prone to feeling ‘shame’ that they  don’t have something or they haven’t done something. «I moved here not because of politics, economic situation or career, although I questioned myself what I am gonna do after my studies. I feel like there is no real ‘social pressure’, you are obliged to do anything, but that’s a slippery road too. It’s very easy to lose yourself, while you clear your brain from everything. Free your mind and your ass will follow. This city gives your all the opportunities for that. The advantage and danger of Berlin is that this place reveals who you truly are and what you are really made of.

My favourite bar has a quote ‘The Berliners are unfriendly and bold, brusque and capricious, Berlin is appalling, loud, dirty and grey, there are construction sites and botched streets everywhere – but I am sorry for all people, who can’t live here!’. 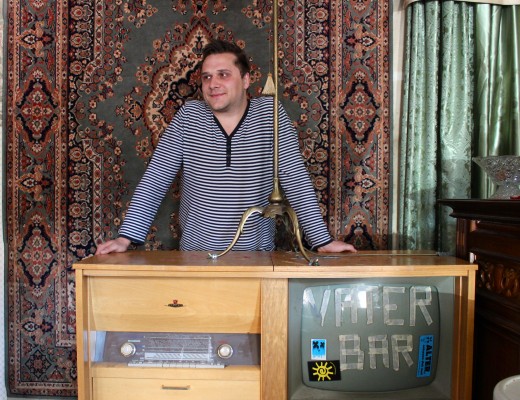 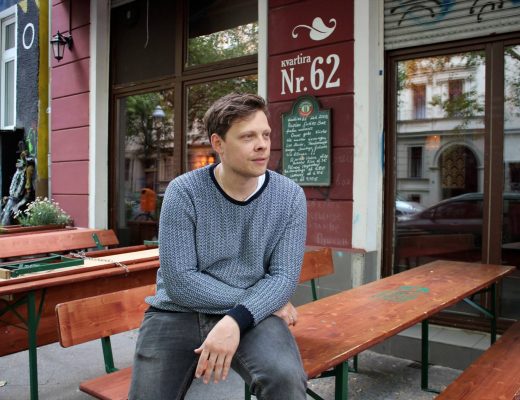 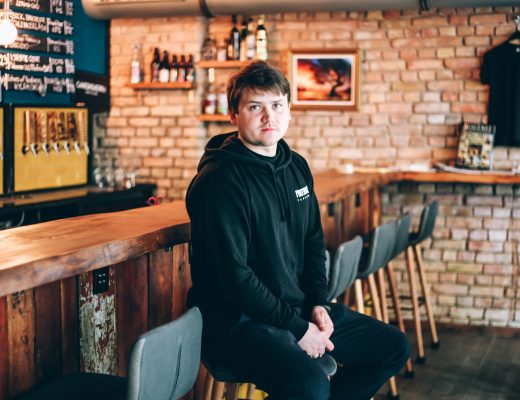